Yes Prime Minister: The Diaries of the Right Hon. James Hacker, Volume I 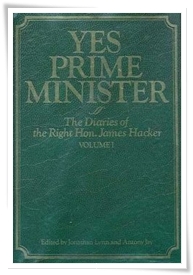 A droll reworking (by the same writers) of the television series broadcast earlier that year. The machinations and absurdities of government are exposed with an equivalent cleverness but the humour is necessarily diminished, coming across in commonplace echoes of the original performances.

← The Ladybird Book of The Hipster
Cod →