42 Word Review: The Man Who Invented the Daleks by Alwyn W. Turner

The Man Who Invented the Daleks: The Strange Worlds of Terry Nation 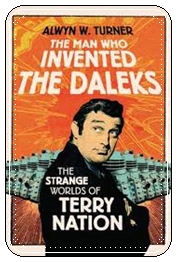 Turner exhaustively researches Terry Nation’s life, shows how the Daleks developed both along- and inside British culture of the 60s and 70s, and contextualises the infamous pepperpots within the broader scope of Nation’s work, from which scrutiny their creator emerges somewhat diminished.