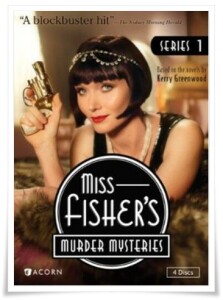 A series that stands far better when viewed in its own right, rather than as an adaptation of Kerry Greenwood’s novels. Set in 1920s Melbourne, the mysteries comprise a well-pitched blend of (not-too-)quirky characters, serious crime and light-hearted societal comings and goings.

← TIM: Defender of the Earth
The Black Archive #38: The Sound of Drums / Last of the Time Lords →