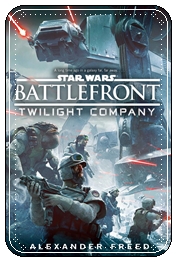 Though somewhat removed from the main Star Wars narrative, Twilight Company offers both well-written military SF and a gritty rounding out of what has been shown of the Rebellion circa The Empire Strikes Back. Alexander Freed imbues his company with case-hardened fatalism.

← How to Fight a Girl
Ripper Street, Series 2 →