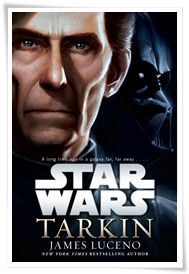 A relatively slim Star Wars volume, sketching out Tarkin’s formative years in flashback while teaming him up with Vader for a runabout battle of wits against anti-Imperial dissidents. Luceno provides constructive character development for Tarkin, Vader and the Emperor pre Episode IV.