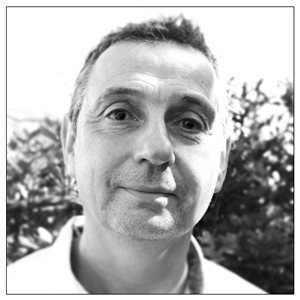 Without considering himself a science fiction writer, Simon Messingham is the author of eight novels for the BBC’s Doctor Who range. His many awards include the British Fantasy Society Short Story Prize and, in 2015, Best Comedy at the Limelight Film Festival for his short film Not My Wife. He co-wrote the BBC cult comedy series Tales of Uplift and Moral Improvement starring Rik Mayall. He lives with his family on the south coast of the UK, where he spends too much of his time working in an office and attempting to finish a feature film before he gets old and dies. Simon’s web series Making Beach can be found here.

Simon is the author of Sirens, a cautionary tale of absolute power; and Crossbones and Skulls, a brace of pirate and zombie stories.