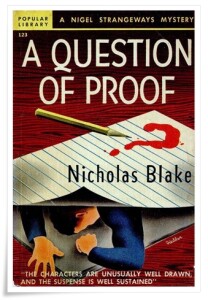 As much middling school story as murder mystery, the untangling of which rarely stirs the reader beyond mild interest. Poetry-quoting gentleman detective Nigel Strangeways elevates the story but makes his appearance late and lacks a sidekick to unpick his seemingly capricious actions.

← The Watchmaker of Filigree Street
The Usual Suspects →