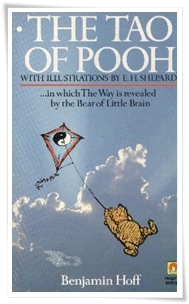 The notion of explaining Taoism (the Eastern philosophy) by way of Winnie-the-Pooh (the pleasingly simplistic bear) is one of those inspirations that work better as lightbulb moments than as book-length treatments. Hoff makes his point in the foreword; the rest is belaboured.

← The Feng Shui Detective
The Ladybird Book of The Hipster →