At the Narrow Passage

At the Narrow Passage 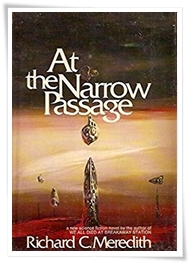 Forty years before Pratchett and Baxter’s ‘The Long Earth’, the multiverse played host to Richard C. Meredith’s Timeliners Trilogy – pulpy, engaging, alternative SF military history with aliens and gratuitously accommodating females thrown in (this objectification undermining what had been a promising start).