Harry Potter and the Philosopher’s Stone

Harry Potter and the Philosopher’s Stone 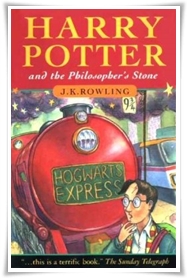 Enid Blyton for the new millennium. After a slow start—and notwithstanding some exaggerated stock characters—Rowling unleashes her fearsome imagination to bring us Hogwarts and Hagrid, Quidditch and quiddities. Stephen Fry’s narration brings welcome verve whenever the text loses its magic.