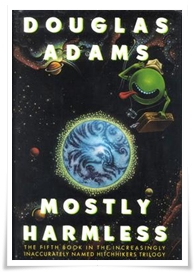 An ingeniously plotted novel—by far the most coherent of the Hitchhiker’s books—and one in which Adams at last paid attention to characterisation; but the effect is spoiled somewhat by an incongruous (if by then expected) jokiness in the prose style.