Only You Can Save Mankind

Only You Can Save Mankind 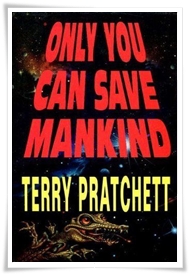 The aliens in Johnny’s computer game are real, in eye-opening contrast to his dissociated home life and the Gulf War’s televised entertainment. The concept entices but the execution feels hurried. Moreover, Pratchett’s twelve-year-olds remain in now incongruous accord with the early 1990s.

← Mystery Men
The Transporter, Series One →