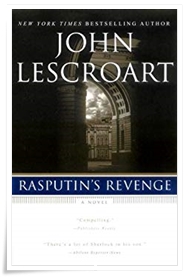 A mystery rich in period detail but lacking a detective. Set in the Russia of Tsar Nicholas II, narrated by naïve French spy Jules Giraud and nominally featuring the son of Sherlock Holmes, this muddles along nicely enough until its absurd dénouement.

← Jingo
Serenity: Those Left Behind →