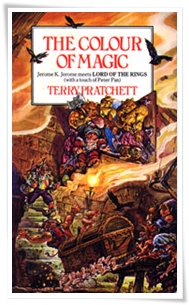 Pratchett’s first Discworld novel is a bubbling primordial soup of imagination. It sets the scene but at this burgeoning stage is less a crowning achievement in comedy and more the concomitant satire of a very funny man trying to write serious fantasy.