The Dark Side of the Sun

The Dark Side of the Sun 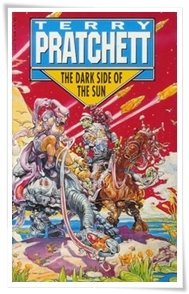 Pre Discworld, pre Hitchhiker’s, Pratchett’s first (unrewritten) novel is a SF not-quite-comedy, rich in exotic detail and soaring with wild concepts… albeit not quite going anywhere. It is a tantalising glimpse into a universe where Pratchett parodied the future, not the present.

← Money for Nothing
Rocky & Bullwinkle: Moose on the Loose →