by Derelict Space Sheep on September 12, 2015 in Excerpts • 0 Comments 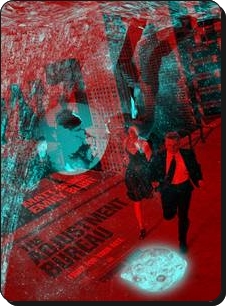 NEITHER A DAMONITE NOR A DICK-HEAD BE

When United States Senate aspirant David Norris pursues the woman he loves instead of following the dictates of fate, he comes into conflict with the mysterious forces that map out and adjust human destiny.

Ever since 1982’s noir classic Blade Runner, which rates 8.3 on IMDB and 8.5 on Rotten Tomatoes, Hollywood has been ransacking Philip K. Dick’s back catalogue in the hope that his name alone will be sufficient to produce another cult hit. Dick-Heads (the moniker under which fans of the author stand proud) have had to endure the adaptive barbarism of Total Recall (7.4 & 7.2), Screamers (6.1 & 4.7), Impostor (6.0 & 3.9), Minority Report (7.7 & 8.0), Paycheck (6.1 & 4.7), A Scanner Darkly (7.1 & 6.6), Next (6.1 & 4.6) and now, knocking woodenly at the gates, The Adjustment Bureau, featuring the immutable Matt Damon. Non Dick-Heads have suffered alongside them and will continue to do so here, with the predictable exception of Matt Damon aficionados (most of whom haven’t been told that — spoiler — Damon died over eight years ago and since has been acting [sic] via digital manipulation of his earlier performances). Still distraught after a false moustache obfuscated Damon’s facial rigidity and thus denied him recognition as Best Supporting Actor in True Grit, Damonites will breathe easy again as The Adjustment Bureau restores their man to original condition, sanding him back to rustic clean-shaveness, black suit and tie.

Although it’s easy to think otherwise, inscrutable acting has not necessarily been the downfall of big screen Philip K. Dick adaptations. Yes, these films seem deliberately to have cast impassive lead actors — Nicolas Cage, Keanu Reeves, Tom Cruise, Arnold Schwarzenegger, even Harrison Ford and Rutger Hauer in Blade Runner — but those who have read Dick’s short story Adjustment Team (which is available in the public domain) will note that Damon’s flatness allows him actually to slot in quite nicely as an approximation of Dick’s minimally refined, almost emotionless original character. The problem lies in that the short story’s conclusion is reached thirty minutes into the movie, and that Damon’s part then is rewritten to encompass a breath of expression that lies well beyond his stock trade in minimalist and stunned.

Although there are many who will prejudge and knock down The Adjustment Bureau as just another movie in Matt Damon’s film-log’raphy (The Bourne Repetition?), it would be remiss to doze in such a fashion and not acknowledge the surrounding ecology. Stepping well beyond Philip K. Dick’s 1954 depiction of women, Emily Blunt brings pathos and believability to her character, while Anthony Mackie and John Slattery are remarkably human in portraying the forbidding agents of the unseen Chairman. Compared to other films where sinister guardians lurk in the shadows behind reality — Dark City, for instance — there is here a subtlety of acting that Damon may never even have caught whiff of (remembering that he has spent much of his career sharing a two-man horse suit with Ben Affleck). Moreover, The Adjustment Bureau is not the action spec-crapular that one might expect, where CGI is given first billing and the everyday laws of physics cease to apply. In fact, the movie places something of a moratorium on mind-numbing action and special effects. It tries instead for mood (even if the most visually evocative scene from Dick’s short story — the office adjustment upon which Damon stumbles — is passed over in seconds). It tries to be thought-provoking.

Unfortunately, whereas Dick’s original story posits a scenario and a reasonable conclusion but leaves the question of predestination open for the reader to ponder, the film treatment takes this same scenario and perverts it into a fatuous exposition on the concept of free will. That some higher power might — spoiler — be impressed by Damon’s and Blunt’s desire to fight for their choices, even though the predeterminism against which they struggle is responsible also for the unfathomable love that motivates them . . . well, this is just as shallow as it sounds in facetious voiceover just prior to the credits rolling.

Elsewhere in the world it may be different, but in Brisbane, Australia, there is a strong tradition of plastering bus stop shelters with large posters of real estate agents (as if they’re somehow more pleasant this way than in real life); and if it’s not real estate agents then it’s cinema advertising, the quality of the films depicted suggesting a clear (if somewhat grasping) intent to contrast them favourably against the experience of waiting for yet another bus not to arrive. Brisbane public transport routes currently are resplendent with Adjustment Bureau posters, Emily Blunt’s dress flowering red alongside a tautologically wooden Matt Damon in what seems a picturesque attempt to create a buzz and make some honey [sic] before the film wilts and dies.

So, as we join the Dick-Heads and the Damonites in turning the box office doorknob clockwise, one question remains to us: do we really have free will, or is there some equivalent of the Adjustment Bureau guiding us through life and warding off disaster? Anyone who has gone to see a rather pudgy Matt Damon trotting desperately though the rain in a pork pie hat — what higher power would allow such a sight; yet, what else could impel us to watch it? — surely will appreciate the poignancy of this dilemma.