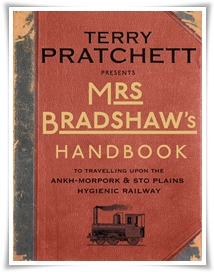 An accompaniment to the novel ‘Raising Steam’, this playful but not-particularly-funny imitation of the old Bradshaw’s Guides holds, unfortunately, no independent merit. Mrs Bradshaw is like a walk-on Discworld character whose tedious observations demand interruption… only she’s been given an entire book.