[released with three sequels under the umbrella title: Monkey – Journey to the West, Siren DVD, 2008] 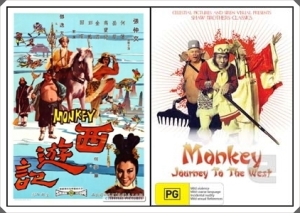 Based on Wu Cheng’en’s Buddhist quest novel Journey to the West, this meandering film-cum-musical seems almost entirely without point or consequence… except to establish prototypes of nearly all those iconic visual elements featured subsequently in the 1978-1980 TV series Saiyūki (aka Monkey).