by Derelict Space Sheep on October 3, 2017 in 42 Word Retrospectives • 0 Comments 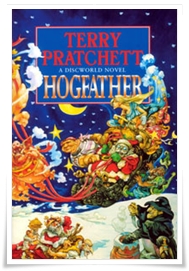 Pratchett might belabour the point, yet his stark critique of Christmas is so lavishly adorned that the humour tends to dominate. Perhaps unsurprisingly for a black comedy, it is Death (no less) and his granddaughter who bring the magic back to Hogswatchnight.

← The Fifth Wave
The Management Style of the Supreme Beings →