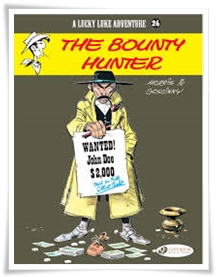 One could argue that Lucky Luke (‘the man who shoots faster than his own shadow’) lacks the personality of Goscinny’s Asterix characters, but there’s no denying the humour derived from pitting his laidback cowboy aplomb against a frontier bounty hunter’s grasping wiles.