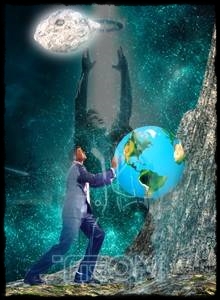 THE LIGHT THAT BURNS HALF AS BRIGHT BURNS TWICE AS LOUD

For any Hollywood mogul casting about for an old movie to revamp for the burgeoning 3D market, Tron must have loomed as a godsend. Cutting edge at the time of its release in 1982, when arcade games were all the rage and Commodore 64s were emerging from the primordial technological soup and waving their 64 kilobytes of RAM at the first generation of PC users, Tron lit up in blue neon and hit the big screen with sufficient cult appeal to launch a franchise: video games; comic books; animated TV series; and inevitably, the no-brainer sequel.

Tron: Legacy commences with a prelude set seven years after the original film, when Kevin Flynn (Jeff Bridges) vanishes into the night and leaves his seven year old son Sam as chief shareholder in ENCOM International. Jump twenty years forward and the orphaned Sam (Garrett Hedlund), now a restless dilettante, returns to the disused 80s arcade of his youth and is drawn into the virtual world that claimed his father. As a digitalised User, Sam is forced into gladiatorial combat against a host of baleful Programmes marshalled by the dictatorial Clu (Jeff Bridges again, digitally youthened). Sam acclimatises to the dystopian setting with Disney-inspired nonchalance, and so begins his quest to— to—

To what, exactly? Well, indeed. (One easily can imagine the writers at this point, languishing somewhere off-grid and scratching their heads under cover of darkness and digital overlay.) What happens next, though not difficult to follow, is far too piecemeal for the audience to engage with. Sam’s search for Zuse, as an example, appears from nowhere and is shovelled quickly behind. The ISOs subplot materialises with biblical pretension that, to the big-screen atheist, appears nothing more than barefaced effrontery aimed at covering up the film’s palpable lack of substance. In fact, the entire plot of Tron: Legacy is reminiscent somehow of that scene from The Great Escape where Steve McQueen outlines his ad hoc breakout plan to the British officers: ‘Ives here is a tunnel man, so he digs in front, pushes the dirt behind him. I stash it behind me, then we burrow through the dirt like a couple of moles.’ Richard Attenborough questions him: ‘Hilts, um . . . how do you breathe?’ —— ‘We got a steel rod with hinges on it. We shove it up and make air holes as we go along.’ McQueen departs and Gordon Jackson exclaims: ‘It’s so stupid, it’s positively brilliant.’ Scriptwriters Adam Horowitz and Edward Kitsis appear to have taken this idea to heart, presenting in Tron: Legacy a plot that, although not entirely nonsensical, is thoroughly slapdash in composition and should by rights see them return to television writing: the Hollywood equivalent of a stint in the cooler.

Let’s be honest. Tron: Legacy is not a movie at all. It’s an extemporised excuse for dazzling the world with state of the art visual and audio effects. Now, there are some of us who don’t really see the point of 3D, and who believe that two dimensions are perfectly sufficient for conveying depth of picture and movement from foreground to background — just as the Renaissance masters managed to paint without recourse to hologram technology; just as the early PCs ran perfectly engrossing games on operating systems that packed fewer kilobytes than a low resolution Facebook picture of Bill Gates — but even those who happily forsake plot for sound and vision will find little satisfaction in Tron: Legacy. The film is overly dark (even without the 3D glasses) and causes constant strain to the eyes. Charitably, this could be seen as a misguided attempt to provide contrast with the glowing light-strips that characterise The Grid, yet there is also a dissident whisper to the effect that darkly shot film is faster (ergo, cheaper) to render and that 3D connoisseurs, having paid more to see the film in this manner, have been thoroughly dudded. As for the iconic Tron light cycles . . . in Tron: Legacy they are raced not with any sense of tension, or engagement with the audience, but rather upon a sprawling, bewildering 3D matrix that clearly has been employed just because it was possible to do so, rather like playing Twister in four dimensions with arms and legs appearing out of nowhere: utterly pointless.

The music, meanwhile, is unremittingly loud and without doubt will inspire more headaches than appreciation. When director Joseph Kosinski was asked why he employed French electronic duo Daft Punk for the score, he is said to have replied, ‘How could you not at least go to those guys?’ — rather as if he’d pulled off a coup in the magnitude of having Prince compose for Batman. Perhaps it is impossible for a film’s score to rise any higher than its plot, but Daft Punk’s relentless barrage, though capturing and echoing back the pulsating moodiness and disjointed energy of the script, nevertheless does little to redeem the movie’s shortcomings. Guy-Manuel de Homem-Christo’s assertion that Tron: Legacy was cut to the music, rather than vice versa, is a line of inquiry that Kosinski’s prosecutors might wish to follow, but suffice for now to say that the musical highpoint — the only instance of shivers being sent down the spine — comes not from Daft Punk but courtesy of an arcade flashback to the Eurythmics’ Sweet Dreams (Are Made of This). In fact, given its overt connection to Tron and the early 80s, Tron: Legacy may have been better served by British duo the Pet Shop Boys, whose musical partnership began in 1981 and is still going strong. An 85-piece orchestra in 7.1 surround sound is all well and good, but if that’s the path Kosinski wanted to take then why not ask viewers to treat the film as incidental material, take away the seats and turn the movie theatre into a nightclub?

Tron: Legacy’s one saving grace comes by way of its cast. Miraculously, and very much to their credit, the actors are able to play their roles straight and so allow for a certain, rickety bridge style suspension of disbelief over the voided chasm of plot and purpose. Garrett Hedlund is suitably eighties in the lead role; likewise Bruce Boxleitner as Alan Bradley and Tron. Olivia Wilde plays her part effectively (albeit one that is little removed from the foil she provided to Hugh Laurie in House). Michael Sheen fully immerses himself as Castor (a compelling if somewhat caricatured digital echo of Mr Humphries from Are You Being Served?) while Jeff Bridges strides through it all with the assurance and crooked authority of an age-wizened shepherd (although also, it should be admitted, with the faint, lingering whiff of marijuana-inspired laissez-faire that he has carried ever since The Big Lebowski). Tron: Legacy could so easily have been a career-killer, but the main players emerge unscathed; nay, with reputations enhanced, not unlike Johnny Depp’s through dint of having packed a decade-long rafter of turkeys from Nick of Time to Secret Window.

So what is the legacy of Tron: Legacy? When asked about the title, Jeff Bridges is quoted as having said, ‘It’s basically a story about a son’s search for his father.’ — not a bad response if he was put on the spot, but hardly an answer to satisfy the critics. (Where’s Dad? Oh, found him. Physically. Emotionally. Game over.) Those involved with making the film might like to believe that the word legacy refers to passing the mantle of ground-breaking ideas and effects from the original movie to the sequel, but the truth is far less glamorous: the legacy in question is nothing more or less than the generation of nostalgic, arcade-loving fans who, having seen Tron in 1982, now find themselves drawn back to the cinema with a mixture of gullibility and docile curiosity sufficient to line the pockets of Hollywood fast food film-makers.

‘I fight . . . for . . . the User!’ Tron snarls at one point, gritting his teeth in defiance; but Tron is little more than a fading afterthought and Tron: Legacy succeeds only in casting the audience as a new element in the franchise: the Used.