Doctor Who: City of Death 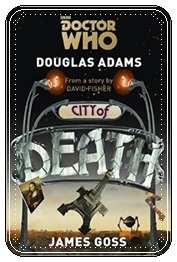 Like Douglas Adams’ script before it, this posthumous collaboration appears to have been written somewhat hastily; while it does capture (and at times build upon) the splendour of the 1979 serial, this isn’t quite the much-pined-for novelisation that Gareth Roberts’ Shada was.