by Derelict Space Sheep on October 2, 2016 in 42 Word Retrospectives • 0 Comments 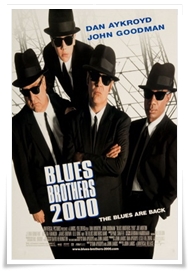 Openly based on and playing homage to its predecessor (though consequently making little sense as a standalone film), this Blues Brothers reprise justifies itself through time-appropriate character progression, in-joke nostalgia, a new car pile-up record and an all-star rhythm and blues soundtrack.

← Who Wants to be the Prince of Darkness?
Adventures with the Wife in Space →