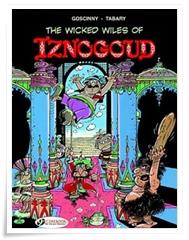 Six pun-filled tales from ancient Baghdad as the wicked protagonist Iznogoud (think Dick Dastardly) is repeatedly thwarted in his nefarious plans to depose the caliph. Goscinny’s imagination is clearly in evidence but the stories lack the scope of his writing for Asterix.