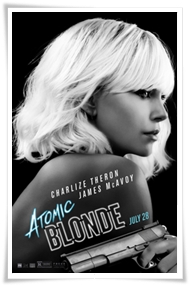 Although Charlize Theron fully justifies her first billing, Atomic Blonde itself is a gratuitously stylistic and ill-considered mix of intestinal plot twists and boring-as-bat-shit-in-a-dark-cave violence. Far more intrigue (and enjoyment) could have been generated had John Goodman played every other part, simultaneously.