Doctor Who: Breakfast at Tyranny’s

Doctor Who: Breakfast at Tyranny’s 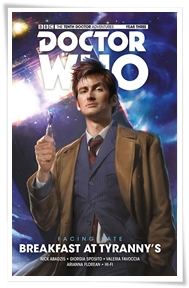 The Tenth Doctor and three non-television companions are thrown into a disorienting world of illusion (hence, not a good point to join the comic strip adventures). Once the action moves to Ancient China there are some nice visual touches to the storytelling.