One Flew into the Cuckoo’s Egg

One Flew into the Cuckoo’s Egg 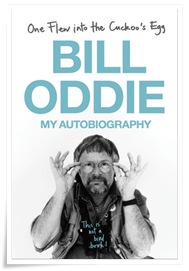 Bill Oddie’s autobiography largely omits both birdwatching and The Goodies, preferring instead Oddie’s rather bleak childhood and pre-celebrity years (an engaging reminiscence by someone who’s come to terms with his demons), then his post-celebrity battles with depression (detailed honestly and without self-pity).