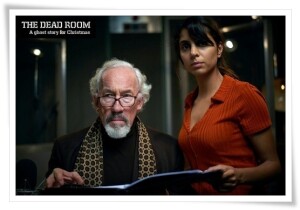 A clever short film written and directed by Mark Gatiss. In essence a two-hander between Anjli Mohindra (as a radio producer) and Simon Callow (a sonorous-voiced actor whose past comes back to haunt him, subverting his narration of a new horror story).

← The Death of Bunny Munro
The Kidnappers Upstairs →