The King of Eden

Eden of the East: The King of Eden 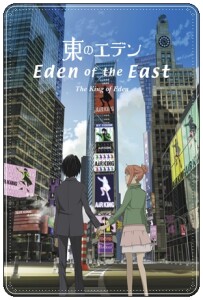 This anime film has a cinematic aura but is far from self-contained. It functions instead as a not-quite-feature-length continuation of the original series, though even here its efficacy is questionable. The plot comes across as a mid-trilogy sidestep leading into Paradise Lost.