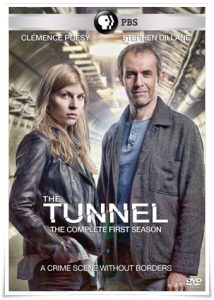 A British-French adaptation of Danish-Swedish crime series “The Bridge”. As with the original, what begins as an intriguing character study and dual-culture investigation loses its way once the villain is revealed and the motive turns out to have been personal. Standard denouement.

← A Girl Walks Home Alone At Night
Return of the Nimbin →