by Derelict Space Sheep on January 8, 2018 in 42 Word Retrospectives • 0 Comments 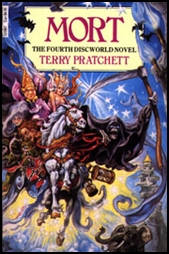 Mort is the book with which Terry Pratchett’s Discworld series turned from imaginative curiosity to comedic fantasy par excellence. The plot is atypically focussed for Pratchett, and Death (who in a mid-life crisis takes on an apprentice) becomes an instant fan favourite.

← Doctor Who and the Krikkitmen
Loch Ness →