The Official C.I.A. Manual of Trickery and Deception

The Official C.I.A. Manual of Trickery and Deception 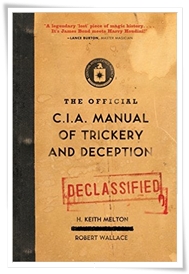 Although the editors try to spruik the significance of two instructional manuals commissioned from magician John Mulholland by the CIA during the Cold War, closer inspection reveals the most interesting facet of these works to be that they were written at all.