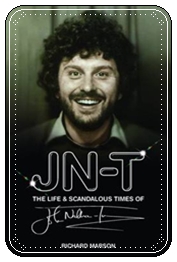 Alternatively, “Over-promoted and over-promoting: John Nathan-Turner and the wretchedly flamboyant demise of Doctor Who.” Apologist Richard Marson argues the self-fulfilling tragedy of JNT’s being shackled to a programme he lacked the wherewithal to produce. An assiduously researched, disheartening exposé of 1980s Who.