Tinseltown: Murder, Morphine, and Madness at the Dawn of Hollywood 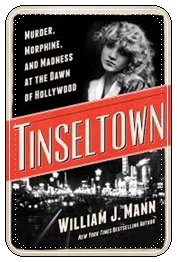 William Mann has exhaustively researched William Desmond Taylor’s 1922 murder. Although middling out between ‘thrilling suspense’ (as promised by the jacket flap) and the overblown revelations of small-screen crime investigations, Tinseltown nevertheless serves as an eye-opening exposé of Hollywood’s nascent, sordid glory.