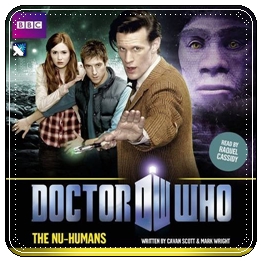 Another book that captures the whimsical bow-tie flitting of the Eleventh Doctor but none of the underlying substance. Raquel Cassidy is perhaps an odd choice given the prominence of a heavy-voiced male nu-human. [Why the affectation? They’re not ‘nu’, dammit; they’re ‘new’.]