Rogue One: A Star Wars Story

Rogue One: A Star Wars Story 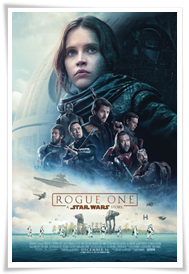 Vader seems oddly diminished and the Ewok-on-a-hot-tin-roof scene-cutting may bamboozle new viewers; but other than this, Rogue One is rousingly true to the sea change of ’77: SF, action, drama, comedy. Alan Tudyk steals the show as the mordant, Marvin-like droid K-2SO.