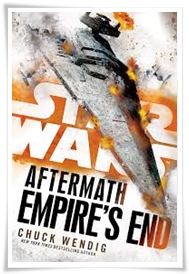 His penchant for the present tense notwithstanding, Wendig writes Star Wars much in the Legends (née Expanded Universe) vein of overblown military ops and political infighting. Ultimately, though, he does succeed in bridging some of the gap between Episodes VI and VII.

← Doctor Who: The Thief Who Stole Time
Life on Mars, Series 2 →