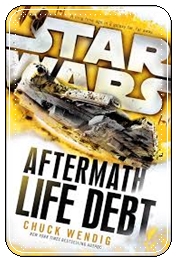 Wendig writes in the present tense (a corollary of his game design work?) and in an oddly chummy manner. His characters have proper Star Wars personality, yet the story — nominally Han Solo’s liberation of Chewbacca’s home world — jinks evasively before making planetfall.