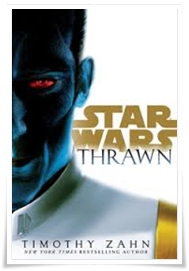 Grand Admiral Thrawn must rank as one of the all-time favourite Star Wars characters (including those from the films). Redacted by Disney to accommodate Episode VII, the Chiss strategist has been reinstated in this much-welcomed origin story charting his rise to prominence.

← Doctor Who: Vengeance on Varos
A 1980s Childhood: From He-Man to Shell Suits →