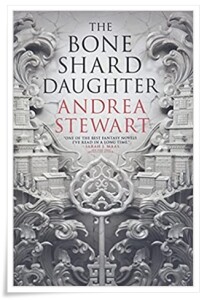 Stewart’s world-building has a certain intrigue (the shifting archipelago setting is a pleasing point of difference), yet the concept of bone-shard magic, which one might expect to drive the plot, proves mostly a curiosity shunted aside in favour of standard character arcs.

← When the Moon was Ours
Never and Forever →