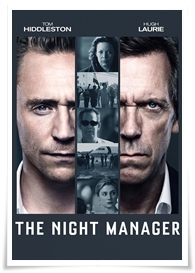 A murky but well-paced six-episode adaptation of the John le Carré novel. Tom Hiddleston is perhaps a tad too Bondlike, but the support cast brims over with quality (and nuance) and co-star Hugh Laurie is chillingly convincing as arms dealer Richard Roper.

← Quentin Blake: In the Theatre of the Imagination
Tintin: Explorers on the Moon →