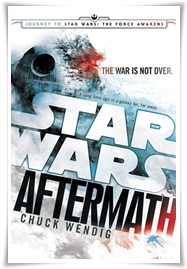 Wendig writes informally but in a manner somehow not out of keeping with the original Star Wars films. The story, though broken by a series of semi-relevant, mostly unrelated vignettes (‘interludes’), kicks along nicely. Bones, the deranged battle droid, is a highlight.

← Doctor Who: Landbound
The Two of Swords, Volume Three →